The other day I read an article that struck me more than most things I read and has stayed with me ever since but today I could see how it related to me. It was the Law of Attraction magazine Fall 2013 edition ‘Editors letter’. The editor explains they made a typo and instead of writing ‘Seeking’ they missed the ‘K’ and wrote ‘Seeing’ instead. They explained the huge difference a little ‘K’ can make. If you are seeking something you are very aware of IT’s absence and focusing on the lack of ‘IT’ whereby ‘Seeing’ is a present tense affirmation. You maybe not be seeing IT in its physical state but you can ‘See’ IT happening, feel it, know it, believe it will be physical, made manifest.

I related to this because despite reading ‘The Secret’ and loving it, loving the ethos behind it and realizing it needed daily practice when it first came into my awareness in 2010 in some way I must have still been a doubtful little sausage and when I communicated with the non-physical I did it in an out side of me ‘Seeking’ beseechy way. I got the non-physical/physical element of it and didn’t doubt ‘IT’ as I had seen so much evidence that there was definitely ‘Something’ bigger than we were aware of but when I was asking for help in a situation I couldn’t get my head round the focus on it already achieved, “Ask, Believe, Receive” do dah.

So I continued to ‘Seek’ not ‘See’ and when I was seeking, I realise now I was asking some unseen super-being for help in what ever the situation was, believing they were far greater than me and therefore far more powerful than little old me who could not possibly have the power to achieve it myself.

My main seeking was to get me out of a horrible work situation (that I could have probably avoided if I had listened to that sickening feeling in my stomach when I applied for the role, lesson learnt). and thought my only gateway out was manifest some money to enable me to leave. Week after week, I read more, prayed more, played the lottery but nothing happened and didn’t realise I wasn’t leaving myself open to All Possibilities. However I must say despite my outer body ‘Seeking’, miracles still happened out of the blue. Eventually the stress (the social disease) turned into ‘dis-ease’ in my body and I found myself in hospital and then on sick leave. How’s that a miracle? Several weeks into my sick leave I had a doctors appointment and the doctor gave me a clean bill of health and said I was OK to return to work the following day. Anxiety started to build in my gut immediately. When I came out of the doctors I saw a missed call from my partner. I called him back and he was enquiring how I got on. During the conversation he asked what I was doing and asked if I could bring him some lunch. He then asked if I had any plans and when I replied ‘No’ he said why didn’t I get us both lunch and we could share it together on what was an unusually hot April day. As we gazed at the view he suggested as it was my last day off work I go to one of my favourite places that afternoon to make the most of it and then added unexpectedly “So back to work tomorrow girl, how do you feel?” where by I answered uncharacteristically honestly without hesitation “Anxious” he enquired why was I anxious and when I relayed why he replied “Well if that’s how you feel hand you notice in. I Am sure it’s the job that made you ill and it’s not worth it” Now this is a man who is not spiritual, Black’s black, white, white so I had been harbouring my true feelings, not believing I could leave without a job to go to for financial reasons and for him to make the connection of negative energy creating physical illness was astounding to me and there I Am from an unusual turn of events in the situation I’d wished to be in so effortlessly it made my head spin ….. And that afternoon in one of my most joyous places was more enjoyable than I can physically express, just to say I have never felt so connected to it All.

Whilst working my notice when people asked what I had planned? I was adamant I did not want to go into the same industry again and listed the transferable skills I’d gained and possible avenues I could go down with them but secretly I was hoping another miracle would pop up and the book I had always planned to write would pop out of my head into print and somehow and idea for self-employment would raise its head. I was still actively looking for paid employment to please my partner but quietly awaiting the arrival on the miracle idea. Gradually pressure started to build at home, being constantly supported and no sign of employment so all day was writing applications not books and I let fear, doubt and anxiety creep in as too my belief in being able to be self-employed and resolved myself to paid employment. I did see one job I thought I’d really like and felt good about it. I enthused to my partner one day about it and showed him  the cover letter I had written that just fell out of my head and how I felt so positive about it I was going to hand deliver it the following day to heighten my chances in hope of evidencing to him ‘Look I AM being proactive’ and that he would be pleased. I did in fact hand deliver the letter the next day and felt as I walked through the car park that the job was mine. Then nothing !!

To help finances I signed on for a couple of agencies, reluctantly one in the industry I used to work in and I had a heart breaking experience, as I sat there in my Jammies and full face of make up (long story) I thought I truly can’t work in this industry any more what ever happened to that job I thought I was so well suited for? Just prior to this experience I had had a couple missed calls with no voice mail so had no clue to who it was from and I was stood phone in hand explaining to my partner the missed calls when the same number called and I immediately answered. It was the job I thought had my name on it and to cut another long story short it did and I Am still doing it now. More miracles. However the shine has warn off now and more and more I Am wishing I was self-employed doing what gives me most joy –writing. Now I Am ‘Seeing’ not ‘Seeking’ and ‘Seeing’ how miracles can happen even when I Am ‘Seeking’ I Am reassured and have an inward knowing that there are more miracles to come and I am back on the self employment route and this time to Quote ‘Winston Churchill’ I will: 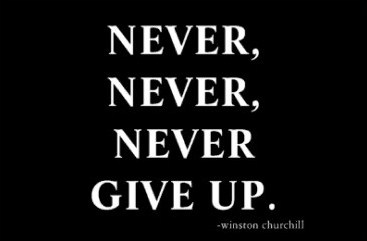 I love this quote and have heard it three times in two days. First heard it in my 2013 horoscope that was so spookily like someone was looking inside my head despite not being a horoscope person I secretly hoped this one would come true.